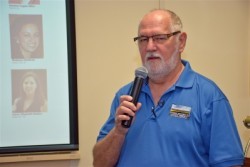 Review the events of 9/11/01 and see the day through the eyes of an air traffic controller who helped shut down the nation’s airspace and who dealt with United 93 prior to its crash near Shanksville, PA; learn how the 40 Heroes of Flight 93 forever changed the course of history. Shortly after the Pentagon was hit, Mal Fuller, watch supervisor at Pittsburgh International Airport, evacuated the control tower and radar room when a hijacked plane was headed directly for the airport. The plane was later identified as United 93. When Fuller returned to the radar room to see if there was still a threat to the airport, the aircraft was no longer under radar coverage. Shanksville is eight miles beyond Pittsburgh’s radar range. Little did the nation know, nor understand what the 40 Heroes of Flight 93 did. Fuller learned air traffic control in the United States Air Force and worked for the Federal Aviation Administration for 36 years after his Air Force service.

Please register online for this adult program. Once your registration is confirmed, you will be sent a link to Zoom to attend the program.