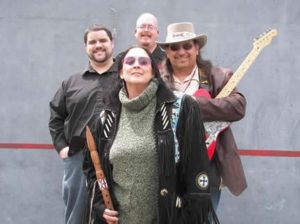 Spirit Wing is a six time Native American Music Award nominee. Since the year 2000, Spirit Wing has appeared at many Native American Festivals throughout North America. Their music comes from a strong folk/acoustic music tradition along with traditional Native songs that date back hundreds of years. All four members of Spirit Wing have performed in various types of bands and ensembles that feature Rock, Blues, Bluegrass, and Country music. Once you hear Spirit Wing’s impassioned performance you will not forget their intense respect for their people and the history of Native Americans or that they have become one of the most popular Native American acts in the Middle Atlantic States.